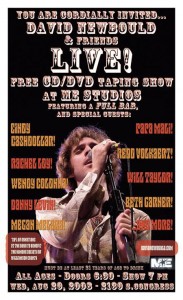 Former New Yorker turned Austenite turned Nashville star David Newbould releases an homage and a good bye to his old stomping grounds of Austin Texas with the help of an extraordinary group of musicians/friends offering up a slice of something forgotten.

Remember when groups like The Band, Tom Petty and The Heartbreakers, and The Allman Brothers Band would put out albums that avoided generalization, reached further then their genres would allow, made music out of a necessity rather then to reach a particular audience? Newbould & Friends is a revisit to those days where it was just a mash up of styles honed together around working class vocals spilling folk narrative to no one in particular and somehow managing to reach everyone. Lyrically its all about honesty with Newbould, but more then that it’s the way in which his delivery is both focused where it needs to be, beautiful or intoned with a deep resonating darkness, as well as carefree and lazily tossed out over the music, as if instead of hundreds he’s singing to a small group of friends.

On a whole the album is rich with sound from piano to guitar and bass to fiddle to the accompanying vocals of Megan Melara and Wendy Colonna which add an even greater depth to the vocals. Its almost a complete and frenzied jam session with almost to much for the ears to handle, desperately trying to cling to one aspect of the music while another comes out of nowhere and just floors you. I’ll admit it took me a couple of tries to get used to Newbould’s delivery but only because, since I’d never heard of him before, I had no idea what to expect, but no doubt he won’t disappoint when you hear him. A great performance.